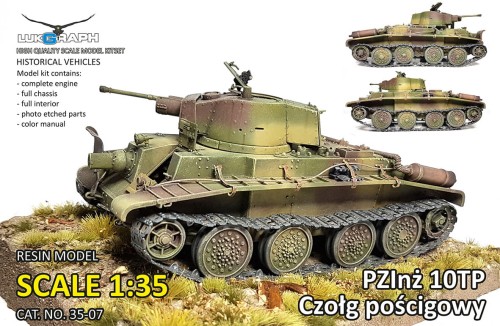 Lukgraph Tank 10TP - 1:35 scale
Resin + photo-etched parts
A bit of history (wikipedia)
In 1936, at the Armored Weapons Technical Research Bureau, the project of the 10TP wheeled-tracked tank was developed, based on the tank structures of the American Eng. Walter Christie. One 10TP tank made at BBT underwent the first factory tests in 1937. This tank uses a Bofors turret and an American LaFrance engine with a catalog power of 240 HP (in fact, during tests on the BBT dynamometer it only achieved about 210 HP). Further intensive tests of the 10TP tank carried out at the turn of 1938/1939 showed a number of defects. The tank's complex, interchangeable wheel-track traction failed most often. Therefore, after some experience, the project was canceled in favor of the 14TP. The tank was destroyed in September 1939, probably as a result of fighting with the Germans.