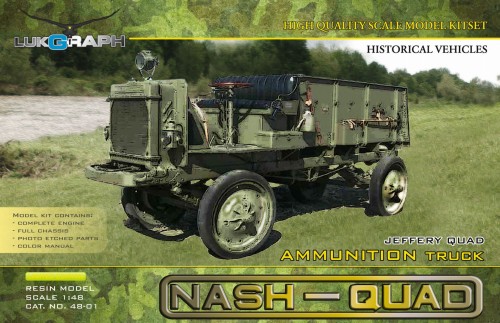 The Quad introduced numerous engineering innovations. Its design and durability proved effective in traversing the muddy, rough, and unpaved roads of the times. The Quad also became one of the most successful vehicles in World War I. The Quad was produced in large numbers by Jeffery and Nash, as well as under license by other truck makers.

In the years immediately preceding World War I, Jeffery designed a four-wheel-drive truck, known as the “Quad” or “Jeffery Quad”, which greatly assisted the subsequent war efforts of several Allied nations, particularly the French. The Jeffery Quad became the workhorse of the Allied Expeditionary Force.

These unique vehicles also saw heavy service under General John J. “Blackjack” Pershing as both the Jeffery armored car and as regular transports during the Army’s 1916 Punitive Expedition through Mexico; Quads were also used extensively during Pershing’s later European campaigns of World War I.The United States Marine Corps also adopted the Jeffery Quad, using it in the Haiti and Dominican Republic conflicts from 1915 through 1917.