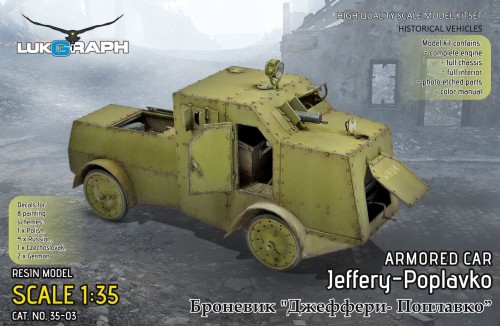 Another model of armoured car built on the Jeffery Quad chassis was built in Russia by Ukrainian officer Volodymyr Poplavko who was the Odessa city commandant (1917–18), and was known as Jeffery-Poplavko.

The armored car proved to have excellent traction and cross-country characteristics. However, it was only partially armored, with the engine hood and radiator, front and side cab being covered. Poplavko decided to improved its recovery capabilities and added a winch with steel cables, and even a light collapsible bridge for crossing trenches.

The Quad introduced numerous engineering innovations. Its design and durability proved effective in traversing the muddy, rough, and unpaved roads of the times. The Quad also became one of the most successful vehicles in World War I. The Quad was produced in large numbers by Jeffery and Nash, as well as under license by other truck makers.

In the years immediately preceding World War I, Jeffery designed a four-wheel-drive truck, known as the “Quad” or “Jeffery Quad”, which greatly assisted the subsequent war efforts of several Allied nations, particularly the French. The Jeffery Quad became the workhorse of the Allied Expeditionary Force.