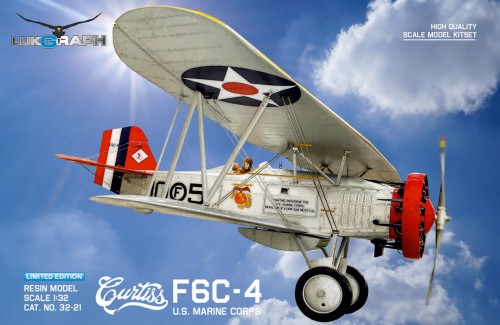 The Curtiss F6C Hawk was an interwar Navy and Marine Corps single engine, single seat fighter based on the Army’s Curtiss P-6 Hawk. Like the P-6 the early versions of the F6C were powered by a Curtiss V-12 liquid cooled engine. The aircraft was armed with two .30 caliber machine guns and could carry a small bomb load. Due to the aircraft’s sturdy design and construction, the F6C became one of the Navy’s first aircraft capable of dive bombing at a steep angle. A prototype of an updated version of the Hawk, designated F6C-4, was delivered to the Navy in 1927. The Navy had decided that air cooled radials were easier to maintain than liquid cooled inline engines while at sea, so the F6C-4 was designed and built with a Pratt & Whitney R-1340. The Navy ordered thirty-one F6C-4s and assigned them to Fighter Squadron 2 (VF-2B) aboard the USS Lexington. The Navy retired them from front line service in 1930, though the Marine Corps continued to use them until late 1932. Most of the Marine F6C-4s were assigned to Marine Fighter Squadron 10 (VF-10M) at Naval Air Station San Diego.